TILIKUM CROSSING
Bridge of the People

The first bridge of its kind in the U.S., Tilikum Crossing, Bridge of the People, carries MAX Orange Line trains, buses, streetcars, cyclists and pedestrians over the Willamette River in Portland, Ore.

Tilikum Crossing adds capacity to the transportation system, with better access to important destinations such as PSU, OHSU, the Central Eastside and OMSI, while reducing commute pressure on other bridges.

Bus Lines 9-Powell Blvd and 17-Holgate/Broadway use the new bridge, reducing their travel time and improving efficiency. Cyclists and pedestrians can access existing and planned greenways and bike routes on both sides of the river. 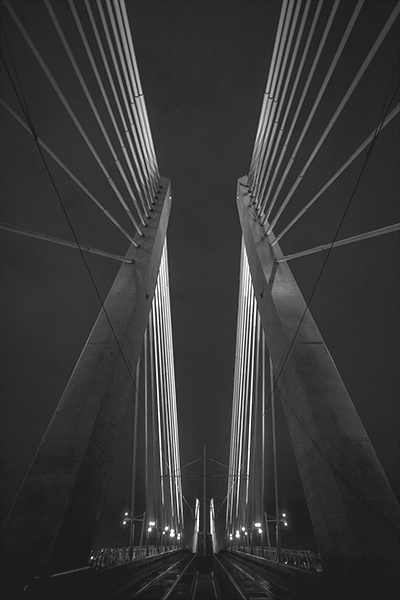 What’s in a name?

The Bridge Naming Committee reviewed nearly 9,500 submissions to find those that would connect and inspire — not just now, but 100 years from now — and best reflect the region’s history and culture.

Committee Chair and historian Chet Orloff said the Native American name was selected because it holds the “most promise to connect the people of our region today with the long past of people who have been here for thousands of years, and to connect with future generations.”

“Tilikum symbolizes coming together. It conveys connections, in not only the relationships between people, but in the connections we will make as we ride, walk, run and cycle across this beautiful new bridge.
— Chet Orloff, naming committee chair and historian

While the spelling “Tillicum” was initially proposed, the Committee selected “Tilikum” because that’s how the first people who lived here spelled the word. 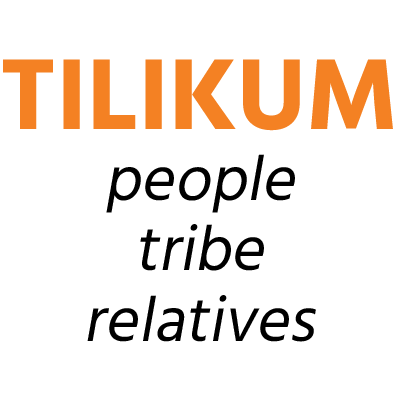 Chinookans are indigenous peoples and tribes who have lived near the Columbia and Willamette rivers for 14,000 years. However, Chinook jargon is not the language of any one tribe. The jargon was developed to help native peoples communicate across distinct languages and dialects, and later was used to communicate with explorers, fur traders and settlers. More…

Tens of thousands of Native Americans lived and traveled along the Willamette River, then called the Multnomah. Most were from the many Kalapuyan nations, including the Tualatin, Santiam and Yamhill. Other tribes from the region, including the Clackamas at Willamette Falls and the Molalla from the Cascades, traded with the Kalapuyans along the river.

Native peoples were the first of millions of people to rely on the Willamette for food, transportation, recreation, trade and more. Captain William Clark entered the river in 1806, followed by more than 50,000 fur traders, pioneers and missionaries.

By the 1840s, Milwaukie, Oregon City and Portland had sprung up along the Willamette. Wheat, produce and even gold flowed down what quickly became a vital river of commerce.

Today, nearly seven in 10 Oregonians live within 20 miles of the Willamette River, which continues to serve as a center for commerce, as well as recreation and transportation.

Tilikum Crossing has a “cable-stayed” design, with two piers in the water and two on land. A cable-stayed bridge is a bridge that consists of one or more towers through which cables are strung to support the bridge deck.

Cable-stayed bridge types are efficient at spanning long distances while minimizing the number of piers in the water. They can also be designed with thinner decks than other bridge types, allowing a more transparent structure and more vertical navigation clearance.

The bridge’s walking/biking paths are extra wide on the outside of the two towers, so you can stop and enjoy the panoramic views! 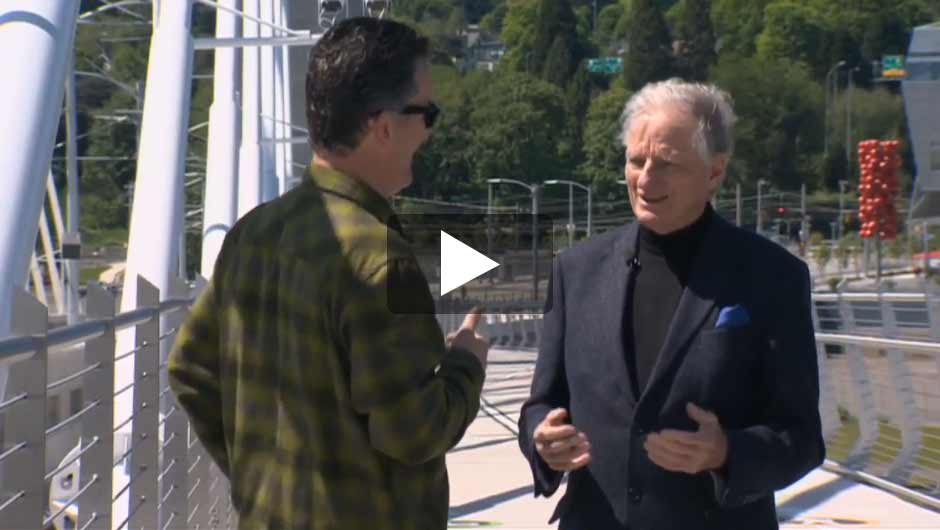 As part of TriMet’s public art program for the new Orange Line, artists Anna Valentina Murch and Doug Hollis created an aesthetic lighting program for the new bridge. Lights focused on the cables and piers will fluctuate in response to a stream flow monitor in the Willamette River, echoing the river movement below.

Learn more about how the lights work

Can the light colors of Tilikum Crossing be changed to mark historic milestones, occasions or events?

We’ve been asked if Tilikum Crossing lighting can be changed, and there are a few reasons why not. First, it’s a fully-realized public art piece with the aesthetic lighting reflecting the nature of the Willamette River in real-time. The art lighting is also a complicated software program that's not meant to be altered. 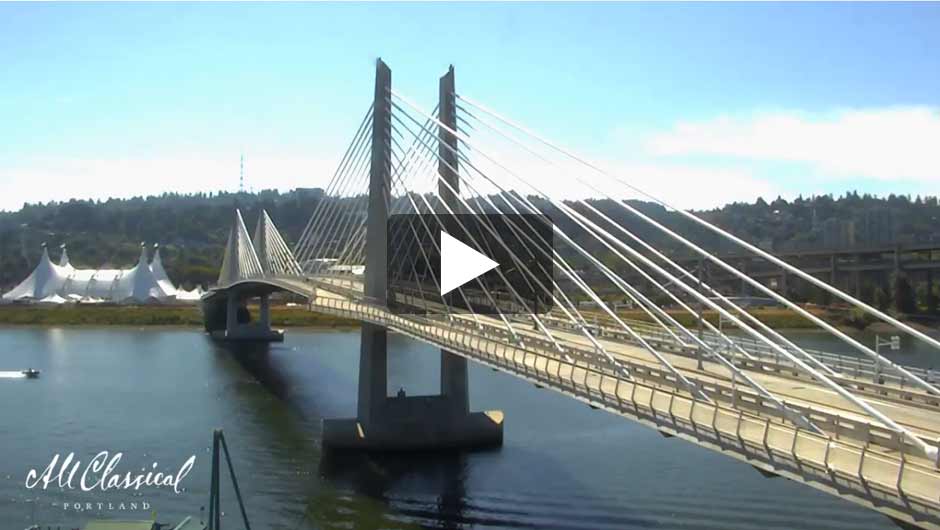 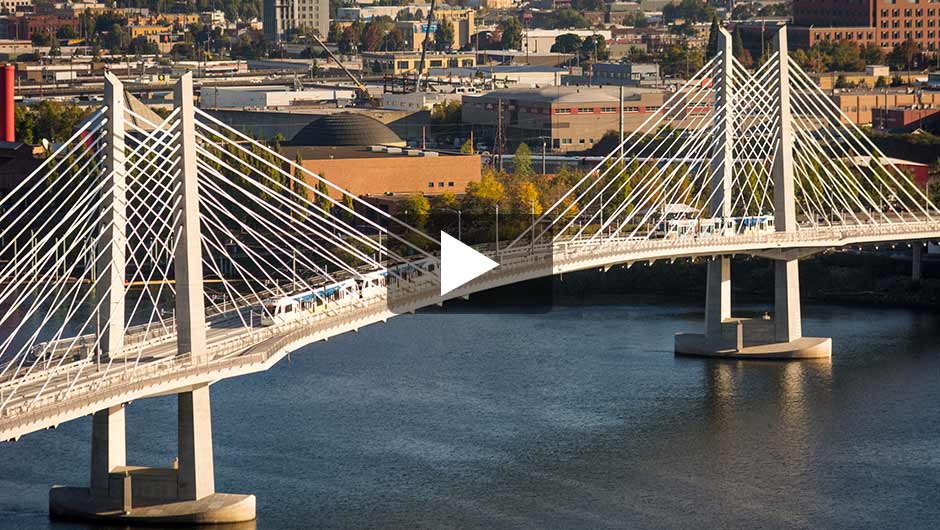 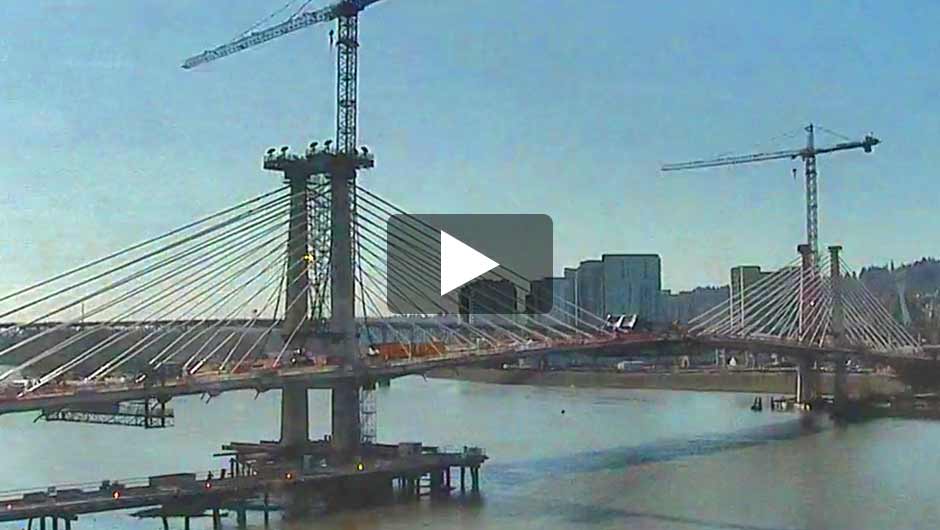 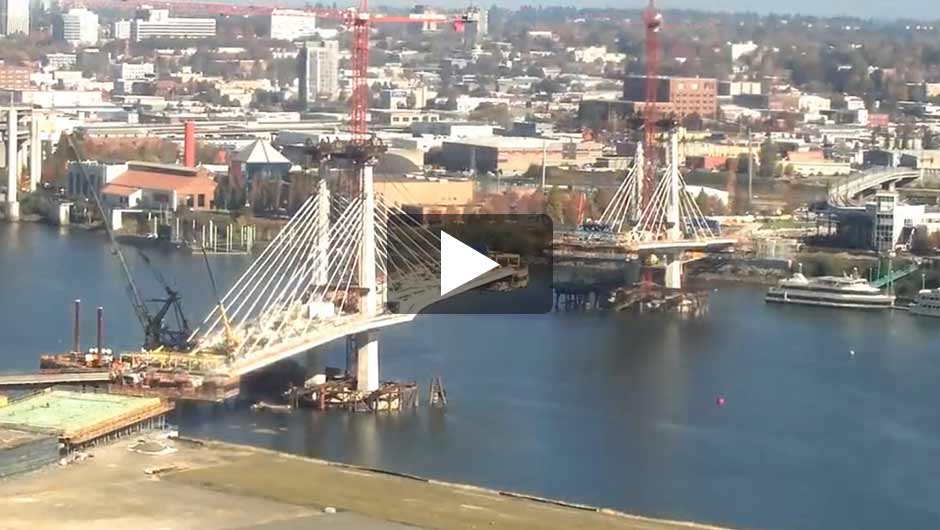 Getting to the Bridge

The best way to experience Portland’s newest landmark is, of course, to take transit, walk or bike to Tilikum Crossing. MAX Orange Line trains, bus lines 9 and 17, and Portland Streetcar offer frequent service to the bridge.

If you plan to drive to the bridge, keep in mind on-street parking in the nearby South Waterfront and Central Eastside districts is limited.