A Culture of Safety

Safety is the focus for all of TriMet’s operational, planning and strategic decisions. Rather than thinking of it as a single priority — even as the highest priority — we are renewing our efforts to create a culture of safety.

TriMet buses and trains travel 2 million miles a month, stopping to pick up riders nearly 1 million times a week. This dynamic operating environment means that safety is more than a priority. In fact, it’s our core value and the lens we use to make all of our decisions. This includes everything from hiring and training employees to operating and maintaining vehicles. Every TriMet employee is charged with embracing safety as a value.

Shortly after a fatal bus collision in April 2010, we initiated a top-to-bottom safety review led by an independent expert from K & J Safety and Security Consulting.

The consultant interviewed employees and critically reviewed our documents and procedures, resulting in two reports with findings and recommendations for improving the culture of safety at TriMet:

We then began moving forward with the consultant’s recommendations. Here’s our progress report:

McFarlane challenged the group to “focus on how to migrate TriMet to the highest levels of safety performance and thereby improve our performance in all areas of our business.” The task force looked at the culture of safety within the agency, the physical environment we operate in, and the behavior of individuals that interact with our system.

The task force held a series of public meetings and wrapped up its work in October with a final report containing 19 recommendations, which we implemented in our action plans.

Creating TriMet’s Culture of Safety: Leading the Way to Service Excellence - An Update
PDF · May 2011

Line-by-line review of all bus routes

We initiated a line-by-line review of every bus route, looking for possible safety issues (such as stops or turns that might be unsafe or illegal). As a result, we’ve closed or moved several bus stops, and even rerouted buses to ensure that we’re putting safety first.

All issues of immediate concern have been addressed, but there are other improvements that will take longer to implement because they are along routes that require us to partner with local jurisdictions to come to a solution. 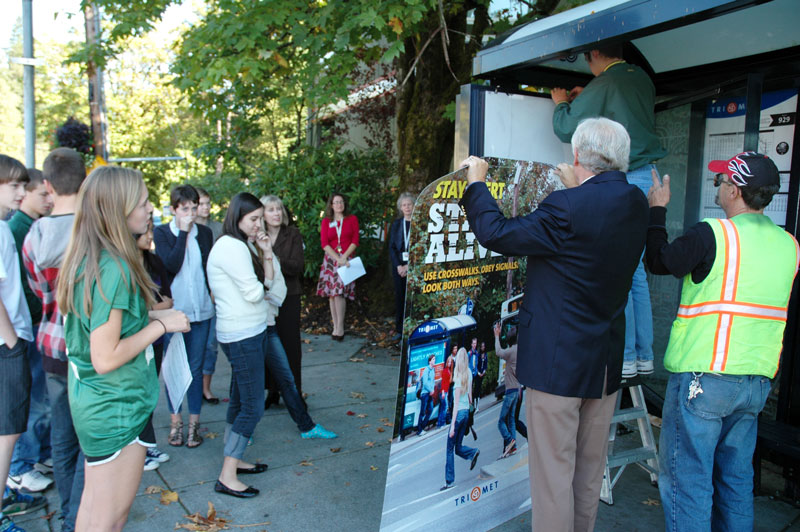 High school students were part of the design process for our 2010 school safety ad campaign, which urges kids to "Stay Alert, Stay Alive." These posters are being distributed to schools and will be installed in bus shelters, on bus benches and on buses and trains.

We take special care to educate riders — especially youth — on how to be safe around buses and trains.

Do you have a suggestion for how we can improve safety education? Let us know.

In 2015, we began making improvements to MAX stations along the Blue Line. These renovations include:

We’ve taken the following steps to develop a culture of safety at TriMet: