Design work on the Southwest Corridor Light Rail Project was paused in 2020 after voters rejected a local funding measure for multiple transportation improvements. In the meantime, Metro, TriMet and the Federal Transit Administration continued working to complete the Final Environmental Impact Statement (FEIS), to ensure the project is eligible for future federal funding. See Metro's project website to access the FEIS.

Impacts to Historic Properties and Parks

In the most recent election, voters rejected Measure 26-218 (also known as Get Moving 2020), a proposal to fund the Southwest Corridor Light Rail Project and many other transportation programs across the region. Without this funding, the light rail project is on hold indefinitely.

Over the next few months, TriMet will work to complete the Final Environmental Impact Statement (FEIS) to ensure the light rail project is eligible for future federal funding if the region identifies resources to restart the project. The FEIS will be published in early 2021.

As part of completing the FEIS, TriMet is seeking public comment on potential impacts to historic properties and parks resources. Some of these resources are eligible for protection under the following federal laws:

TriMet is working with state and federal partners, including the Federal Transit Administration (FTA) to assess these resources, determine potential impacts, and develop measures to mitigate impacts. Potential impacts were first disclosed in the Draft Environmental Impact Statement (Summer 2018). Since then, TriMet has been able to avoid or reduce impacts, but some remain. The FTA, TriMet, and Metro are currently working on the Final Environmental Impact Statement, which includes the updated impact analysis and public input. After the Final EIS is issued, the FTA will publish the Record of Decision that will include mitigation measures to be incorporated into the project to address potential impacts.

The purpose of this webpage is to inform the public and seek comment on:

The Potential Impacts and Mitigation for Historic Properties and Public Parks document provides detailed information about the historic properties and parks eligible for protections under Section 106 and Section 4(f), potential impacts to these resources, and the proposal to mitigate these impacts. Additional information can be made available upon request.

The project held a public comment period for the information presented in the Potential Impacts and Mitigation for Historic Properties and Public Parks document  from Friday, December 18th, 2020 through Tuesday, January 18th, 2021 . Comments will be sent to the FTA for their consideration in finalizing their determinations. Final documentation of these impacts and mitigation measures will be published as part of the Final Environmental Impact Statement and Record of Decision in early 2021. 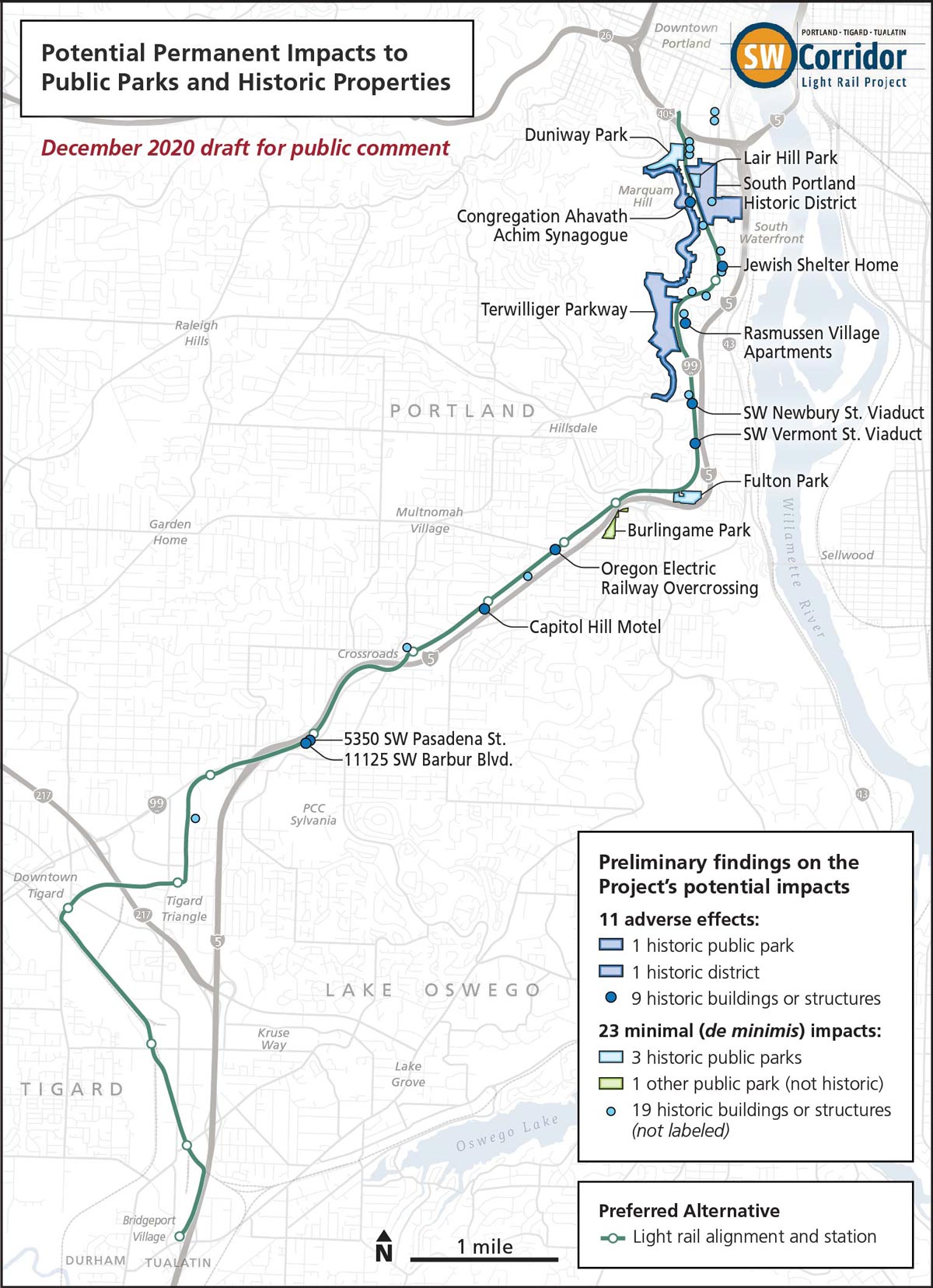 This map shows the location of the potential impacts along the project alignment.

Background on the Section 106 and Section 4(f) Processes

The lead federal agency for the project is the FTA. TriMet and Metro are the local project sponsors. To comply with Section 106 and Section 4(f), the FTA must consult with the Oregon State Historic Preservation Officer (SHPO), Native American Tribes, local agencies and the public at different points in the environmental review process. With public input, the FTA will then finalize the determinations required under Section 106 and Section 4(f) as explained below.

Section 106 provides special protections for historic properties within the Area of Potential Effects (APE). A historic property is a building, site, structure, object or district that is eligible for listing in the National Register of Historic Places (NRHP). Potential resources that could be affected by the Project include historic structures, districts of historic structures, and archaeological resources. FTA defined the APE and evaluated the historic properties in consultation with SHPO, Native American Tribes and other agencies. An adverse effect on a historic property means that the project may alter any of the characteristics that qualify the property for listing in the NRHP.

Section 4(f) provides special protections for public parks, recreation areas, wildlife refuges and historic properties that could be affected by transportation projects. Properties protected by Section 4(f) are collectively referred to as Section 4(f) properties. Section 4(f) looks at whether these properties are used by a transportation project. Project proponents must reasonably attempt to avoid using these properties, demonstrate that potential impacts are minimal (also called de minimis), or demonstrate that the project choses the alternative that causes the least harm to affected properties. If a resource is both a Section 4(f) property and a historic property (e.g., a public park that is also eligible for listing on the NRHP), then the effects to park functions and historic characteristics are evaluated separately.

For historic properties, a minimal (de minimis) impact means that the FTA has determined that the Project will not adversely affect the historic property in question. For parks, recreation areas, and wildlife and waterfowl refuges, a de minimis impact is one that will not adversely impact the features, attributes, or activities qualifying the property for protection under Section 4(f).

The Area of Potential Effects (APE) means the geographic area or areas within which an undertaking may directly or indirectly cause alterations in the character or use of historic properties, if any such properties exist. The APE is influenced by the scale and nature of an undertaking and may be different for different kinds of effects caused by the undertaking. (36 CFR 800.16(d)). In defining the APE, the FTA considers potential direct, indirect and cumulative effects to historic properties and all aspects of integrity, including their associated settings as applicable.

The FTA is proposing to make the following determinations under Section 106 and Section 4(f). The key findings are included in the map above.

The Project evaluated 619 structures in the APE, and 79 are recommended eligible for listing in the NRHP. Of the NRHP-eligible historic properties, 11 would be adversely affected by the project.

Thirteen archaeological sites were identified in the APE, of which nine were recommended ineligible for listing in the NRHP. The remaining four would be evaluated when the project moves toward construction. Potential impacts on archaeological resources, including undocumented resources, would be addressed through implementation of an Archaeological Site Protection and Monitoring Plan and an Inadvertent Discovery Plan.

The FTA and TriMet have proposed mitigation for the adverse effects on the 11 adversely affected historic properties, which are outlined in the Potential Impacts and Mitigation for Historic Properties and Public Parks document. These mitigation measures will be finalized in consultation with Native American Tribes and other consulting parties and will be described in a signed Memorandum of Agreement between TriMet, SHPO and the FTA.

There are 82 Section 4(f) properties in the project study area: 79 historic properties (of which five are also public parks), and three additional public parks that are not historic.

The project would result in an impact that is greater than minimal on 11 Section 4(f) properties. (These 11 properties are also historic properties, and would also be adversely affected under Section 106.)

Of the remaining 71 Section 4(f) properties, 23 properties would be permanently impacted at a minimal (de minimis) level, and 11 would be temporarily used during construction and restored to their previous condition.

The remaining 37 Section 4(f) properties would not be used by the Project under Section 4(f).

FTA and TriMet have proposed measures to avoid impacts and minimize harm to Section 4(f) properties. This has reduced most impacts to be minimal or temporary. Mitigation measures are outlined in the document above.