Prior to 1880s, the hilly area west of downtown Portland saw a steady growth in the number of residents. Until 1890, public transportation to the Southwest hills was provided by horse-drawn coaches running from 1st and Yamhill to 19th and Spring Streets. 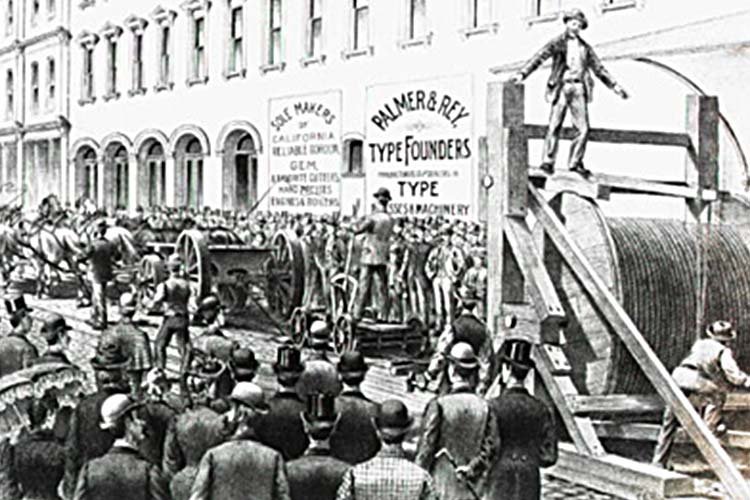 Stretching the cable for the Portland Cable Railway

It became apparent that the city was outgrowing the stage line, so the Portland Cable Railway Company was formed on June 24, 1887. In July, a delegation was dispatched to San Francisco to acquire the rights to use its system in Portland. 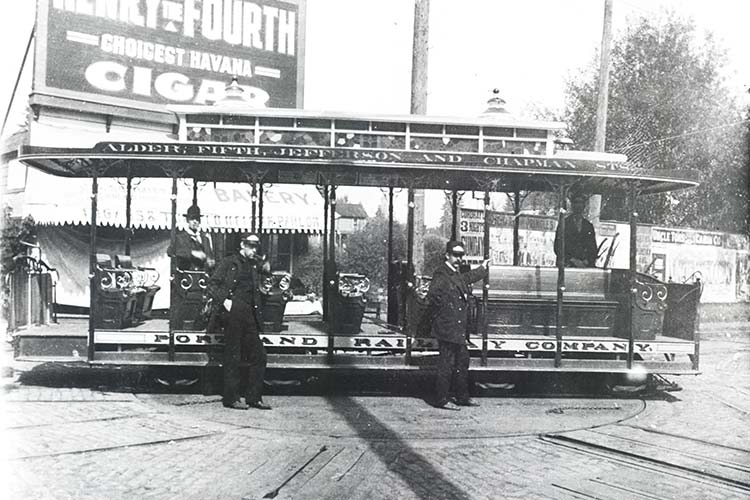 It was decided to use the system operated by the Powell Street line in San Francisco. With those operating rights secured, work on the line began in October 1887 with the construction of a steep (20 0rade) wooden trestle 1,040 feet long to carry the cable cars from 18th and Mill Streets to the Southwest heights. Track was laid and the powerhouse, located at SW 18th and Mill Streets, was built. The elegant San Francisco style cars were built in Stockton and shipped to Portland by boat. Upon arrival at the dock, they were immediately placed on the track and hauled to the powerhouse by horses.

The first day of public service was Feb. 22, 1890. The original route ran from 18th and Spring streets down the trestle to Jefferson, down Jefferson to 5th, down 5th to Alder and east on Alder where it ended at Front Ave. Later, extensions were built to Union Station at 5th and Hoyt and west from 18th and Jefferson to the present-day Washington Park, then called City Park. The crews worked 12-hour days earning $3.00 a day. That was good money for that time.

Portland Cable Railway employees pose proudly with their equipment in front of the head office (powerhouse). This location is now buried under the westbound approach to the Sunset Highway tunnel.

In 1896, the route from downtown Portland to 18th and Jefferson was electrified. Passengers transferred at Jefferson and 18th to the cable cars for the long pull up the trestle to the heights. Cable service up the trestle to Spring Street continued until 1904, when the Portland Railway Company started the Portland Heights streetcar line along Vista avenue. The unique 14-year contribution of cable-powered transit in Portland faded into obscurity.