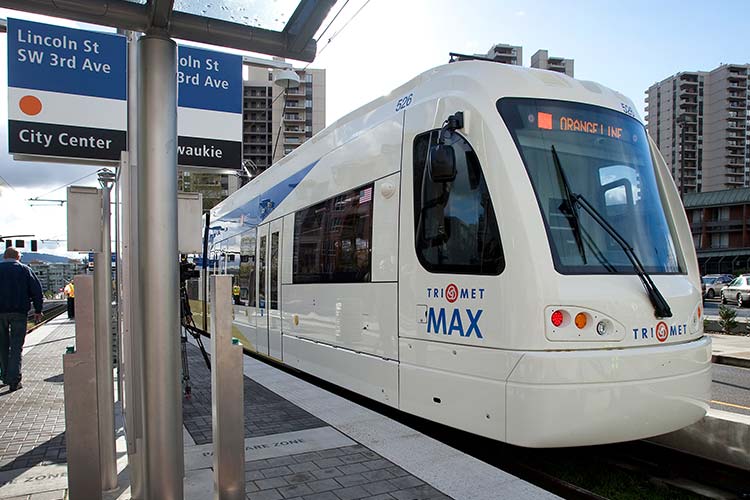 After more than 45 years serving the Portland region, TriMet service continues to evolve, including this new MAX car design for 2015.

With Portland’s transit ridership steadily falling in the 1950s and ‘60s, the area’s primary transit service, Rose City Transit Company, was faced with bankruptcy. It demanded a major fare hike, threatening to discontinue all service. Thirty-four companies had served the Portland area in the nearly 100 years previous.

Mayor Terry Schrunk appointed a seven-member Mass Transit Advisory Commission*, who ultimately became the foundation of TriMet’s first board of directors. On January 14, the Portland City Council passed a resolution to create the Tri-County Metropolitan Transportation District of Oregon, called TriMet, to take over the local bus systems and provide regional transit service.

The Oregon Legislature passed House Bill 1808 allowing the creation of transit districts and providing them with the power to raise revenue through a payroll tax.

Rose City Transit proposed turning its operation over to City and TriMet, while maintaining title until legal resolution of fair value and pension claims were worked out.

A “Transportation Plan for 1990” recommended 54 major new highway projects, many of them freeways and expressways. It predicted the declining bus system would remain insignificant as a transportation source except for the rush-hour commute to downtown. 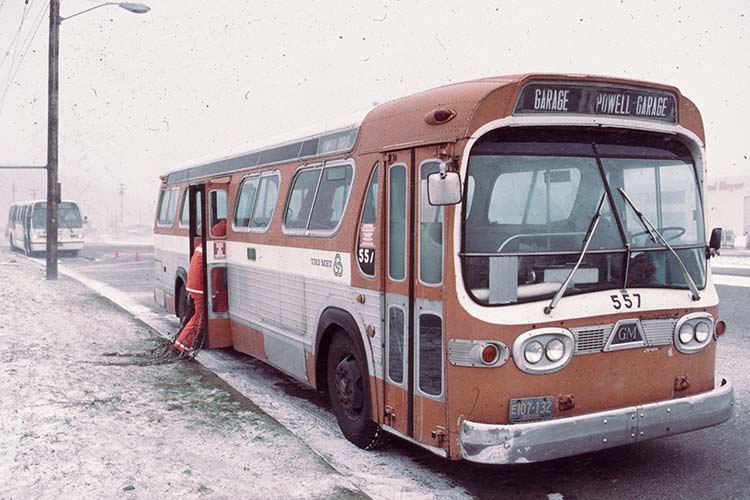 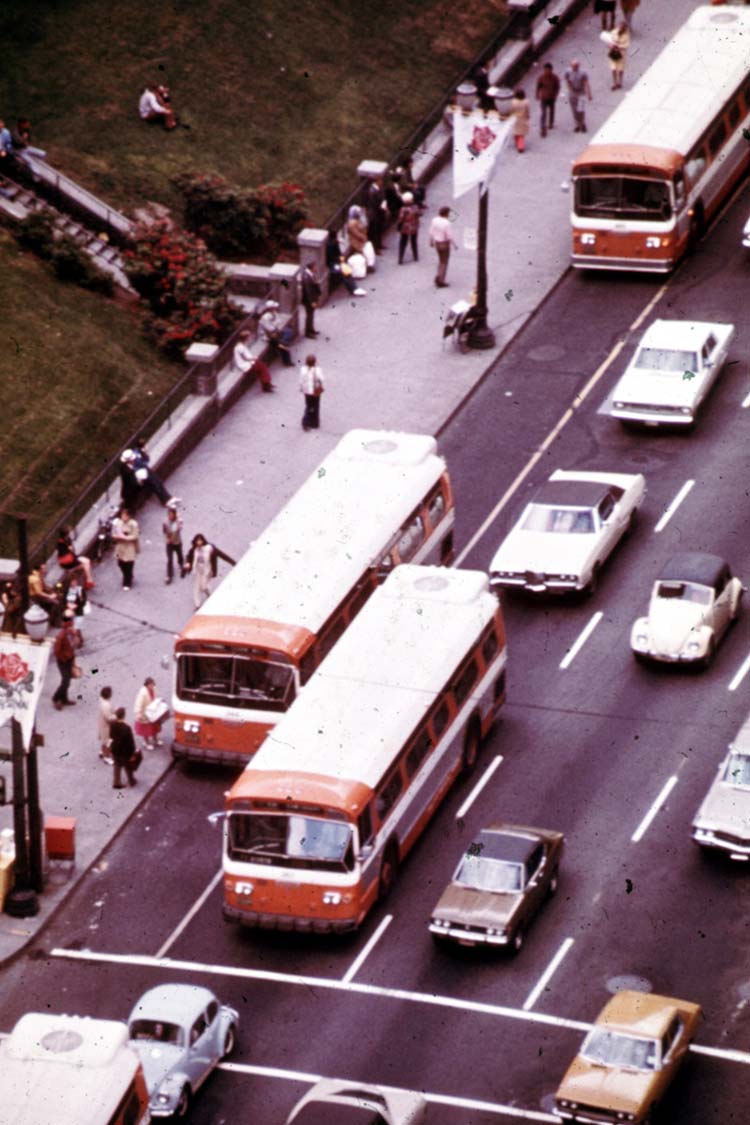 TriMet began operating Fareless Square, two years before the opening of the downtown Transit Mall — an integral part of its overall strategy to increase transit use and to reduce air pollution by eliminating short auto trips. 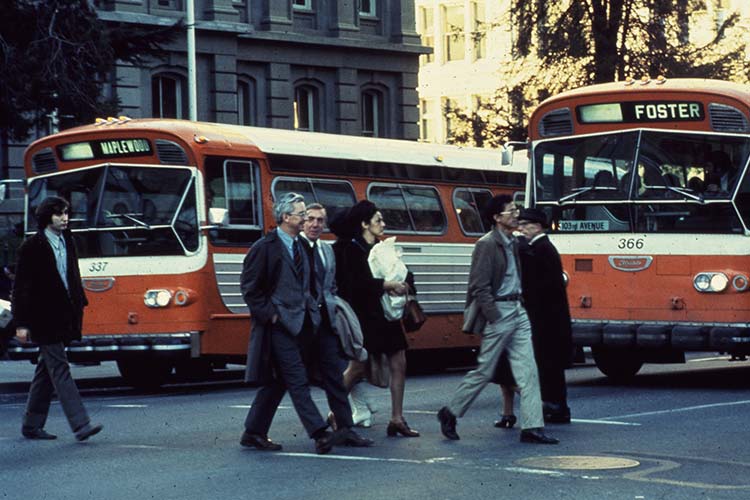 Buses and pedestrian on Fareless Square

December 17 saw the opening of the downtown Transit Mall, which some believed triggered tens of millions of dollars in new downtown construction and solidified it as a retailing center.

Voters approve the creation of Metro, an elected regional government with responsibility to plan for the region’s future. 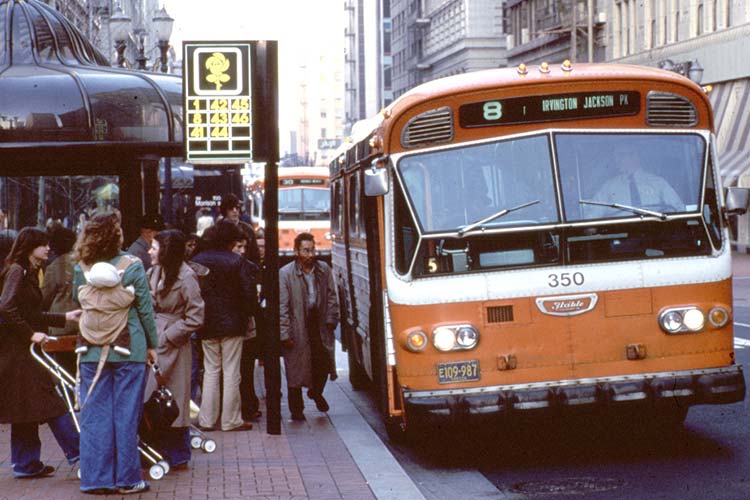 The first MAX line, the eastside Banfield Light Rail Project, receives federal approval to use freeway fund, using UMTA funds. Though used in Europe, the only modern US light rail had just opened in San Diego. Portland officials decided its bare bones treatment was not right for here and began to develop their own approach.

Metro adopted a new Regional Transportation Plan to focus growth within the UGB and around light rail. 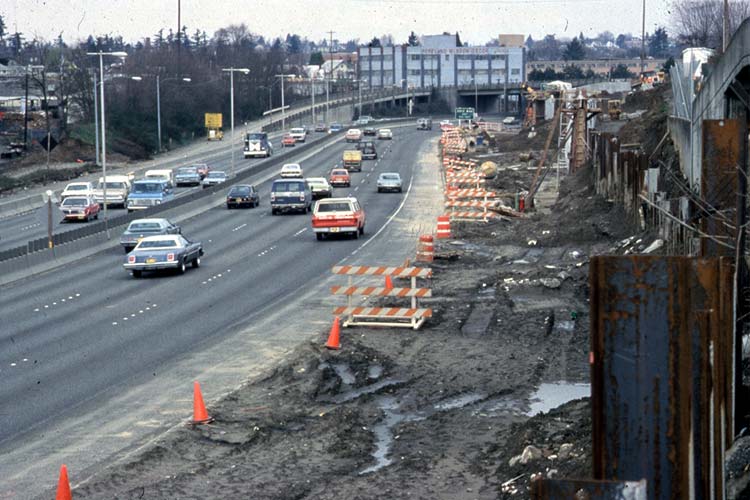 Construction of Eastside MAX light right along the Banfield Fwy.

Banfield Light Rail — named the Metropolitan Area Express or MAX for short — opened on a 15-mile alignment between the suburb of Gresham and downtown Portland, renewing rail passenger service in Portland.

A two-million-dollar grant was announced from the Urban Mass Transportation Administration that enabled purchase of vintage trolleys. 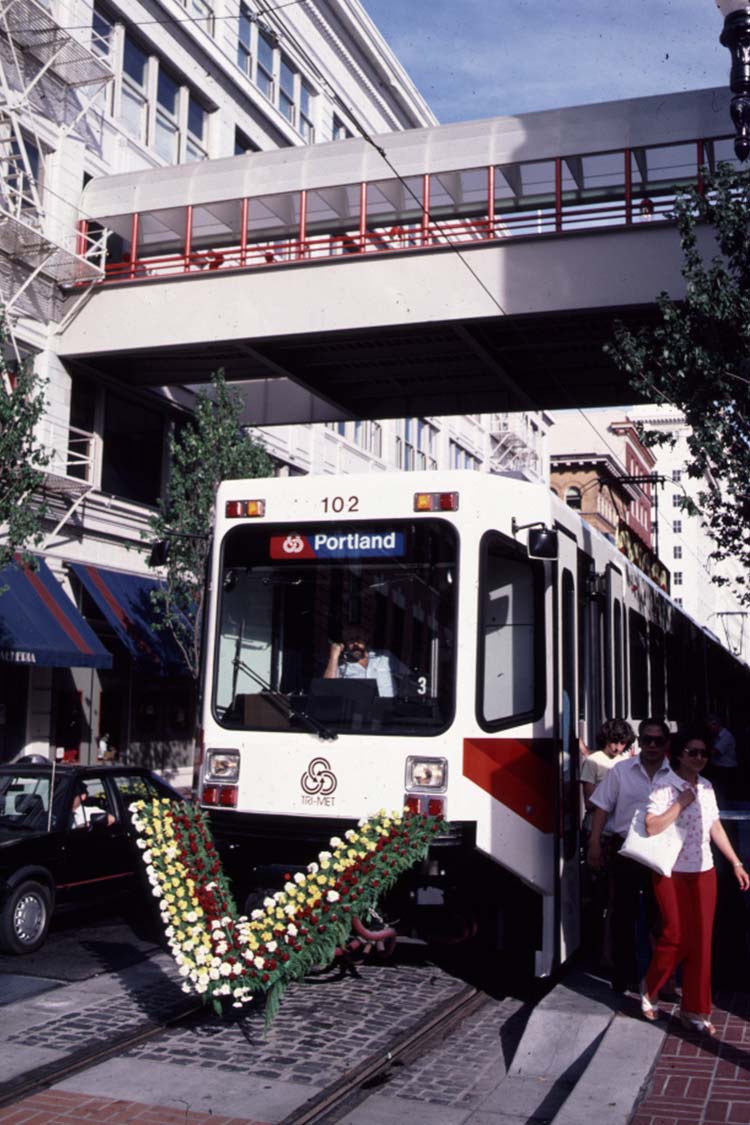 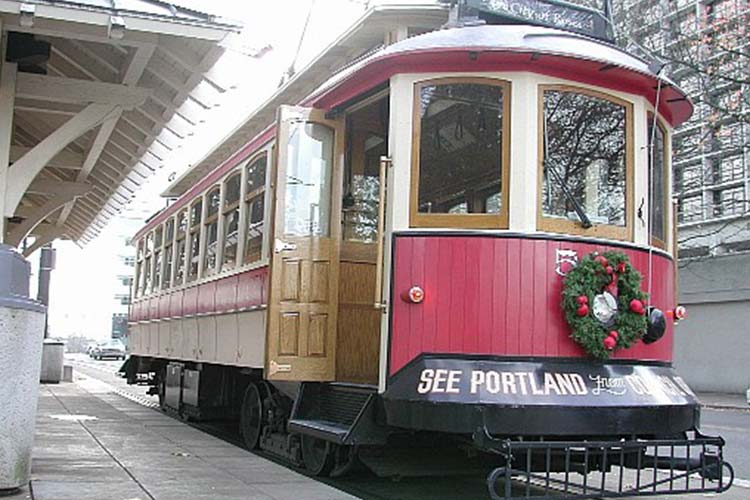 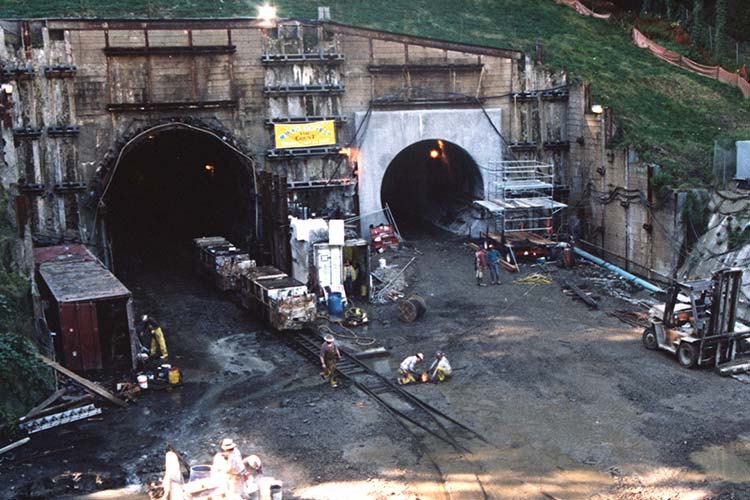 Construction of the Westside MAX tunnel

The downtown Transit Mall expanded north of Burnside to Union Station, opening up access to Chinatown, the Greyhound Bus station and the Amtrak station, while advancing development in the area.

An 18-mile light rail extension opened from downtown Portland through the western suburb of Beaverton to Hillsboro, serving the fast-growing high-tech corridor in Washington County. The Westside MAX extension connected with the eastside line in downtown, creating a single 33-mile alignment that was eventually called the MAX Blue Line.

Four Frequent Service bus lines were established, with service every 15 minutes or better every day. 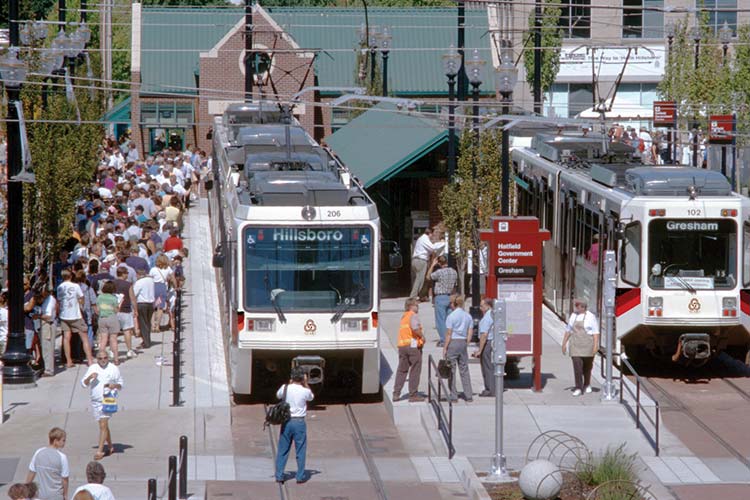 An Oregon-only light rail project was placed on the ballot to replace the failed South-North extension, originally proposed to extend from Vancouver, Washington, to Milwaukie, Oregon. The bond measure had been approved by the voters in Oregon but failed in Clark County, Washington. This new proposal also failed in the region, although it was supported by voters within Multnomah County and the city of Portland.

Construction began on both the Airport MAX Red Line and the modern Portland Streetcar. 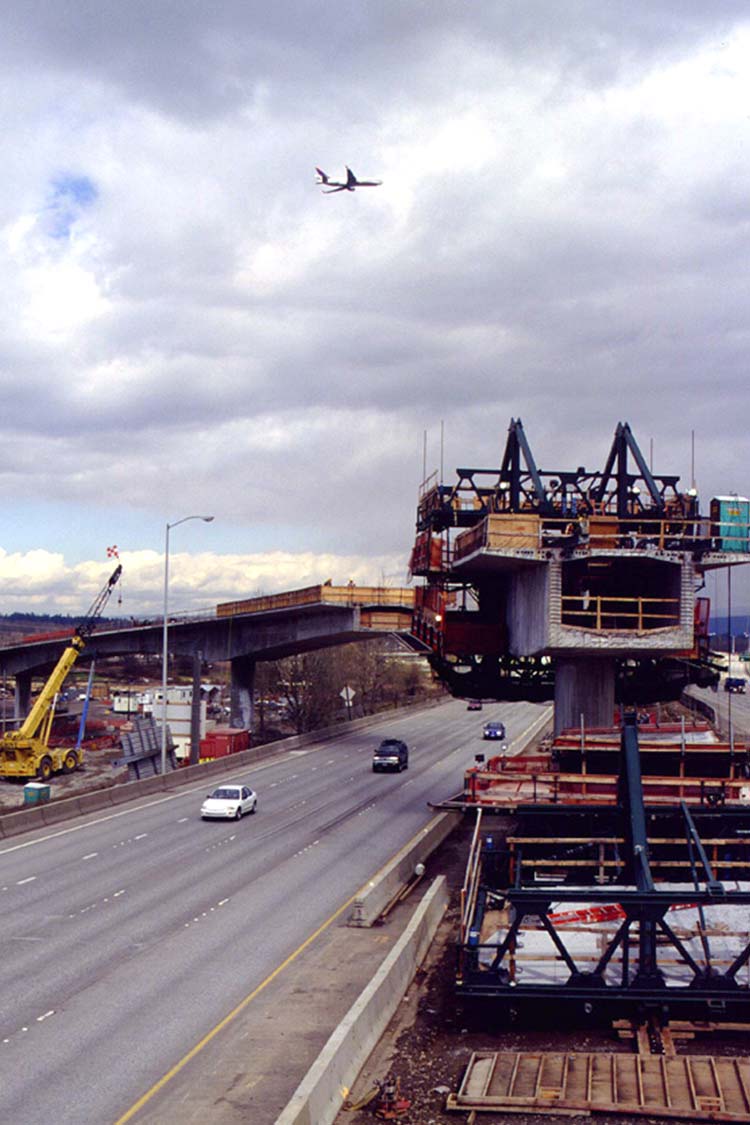 Construction began on the Interstate MAX Yellow Line. Born of Portlanders’ support for the proposed 1998 Portland to Milwaukie alignment, the Interstate alignment would serve north and northeast Portland. 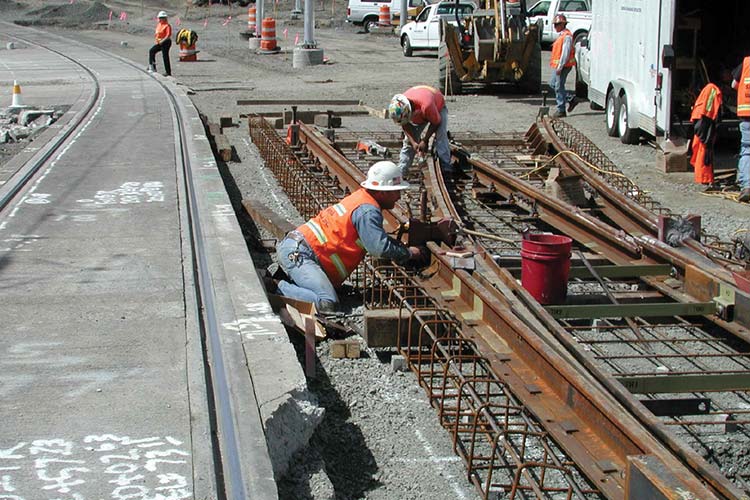 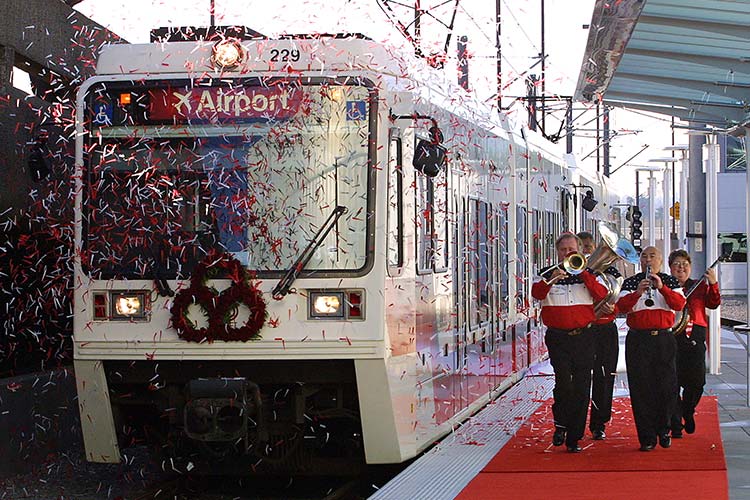 TriMet adopted a new, up-to-date look, the first change in over 20 years. The hyphen in the name was dropped, and new colors for the logo and vehicles were introduced.

Twelve more bus lines were upgraded to Frequent Service, bringing the total to 16. Riders flocked to these comfortable buses with 15-minute service, proving that adding frequency and amenities to existing routes was more effective at attracting riders than offering new, infrequent routes. 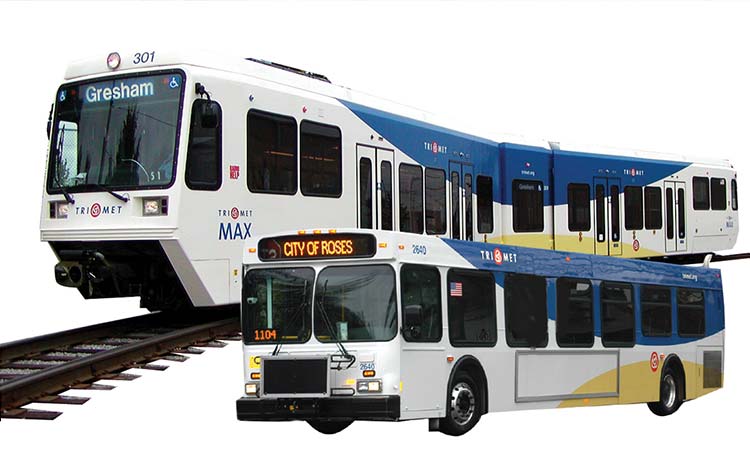 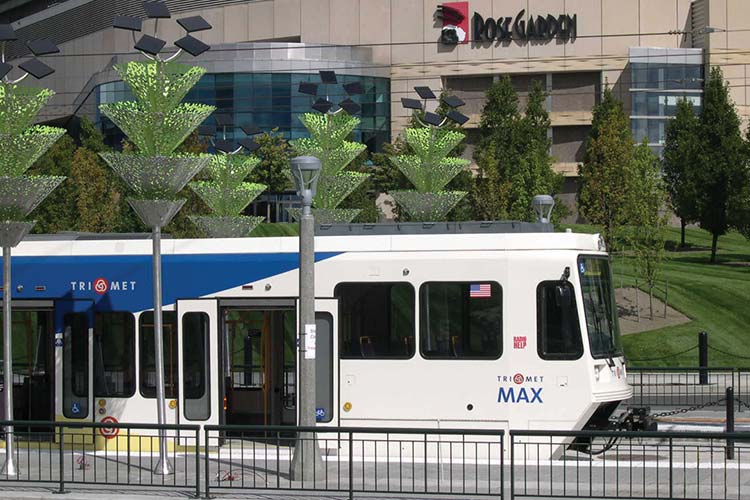 The opening of the 1.2-mile RiverPlace extension lengthened the Portland Streetcar line to six miles total, with 40 platform stops. 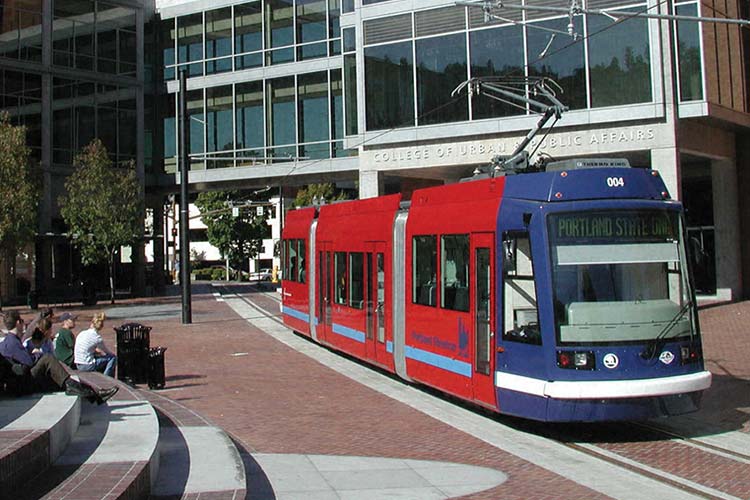 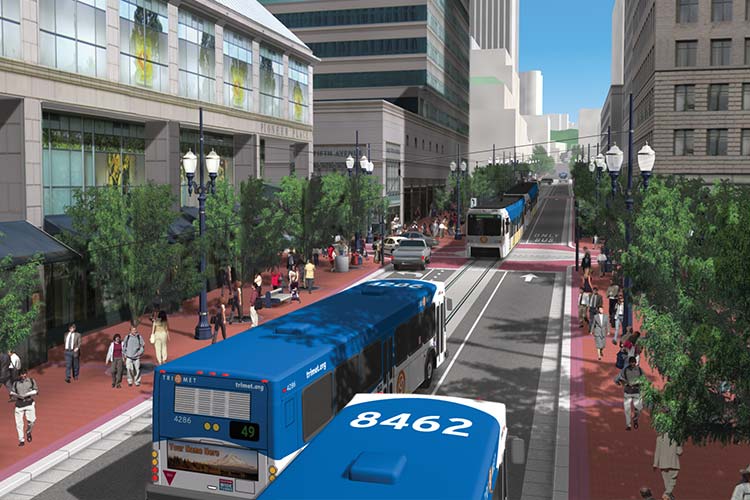 Simulation of new MAX service on the Portland Transit Mall

More than ten years in the making, TriMet’s 14.7-mile WES Commuter Rail line opened on February 2. WES (Westside Express Service) is one of the few suburb-to-suburb commuter rail lines in the nation. WES provides service between the cities of Beaverton, Tigard, Tualatin and Wilsonville, connects to MAX Light Rail in Beaverton and adds a welcome alternative to I-5/Highway 217 for commuters in Washington and Clackamas counties. 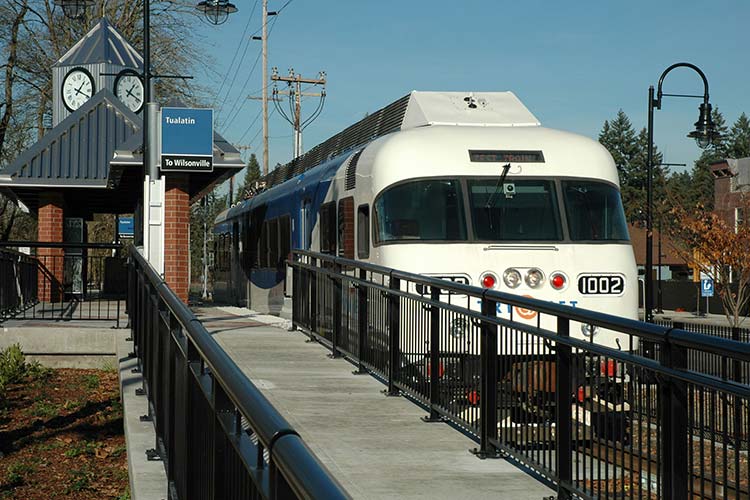 On September 2, the 8.2 mile MAX Green Line opened, adding a convenient and affordable way to get around for people living and working in Clackamas County and East Multnomah County. The Green Line travels alongside I-205 to Gateway and continues west to downtown Portland, where it serves the Transit Mall between Union Station and Portland State University. 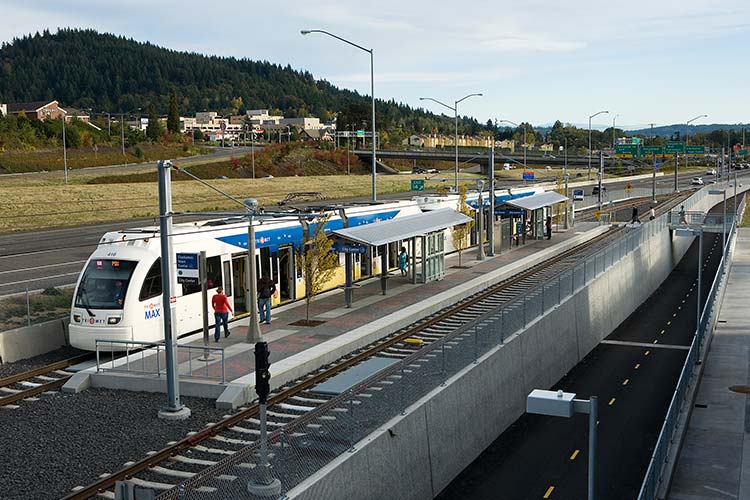 Tilikum Crossing, Bridge of the People: The first of its kind multi-modal bridge in the U.S. carries light rail and streetcar trains, buses, bicyclists and pedestrians, but no private vehicles 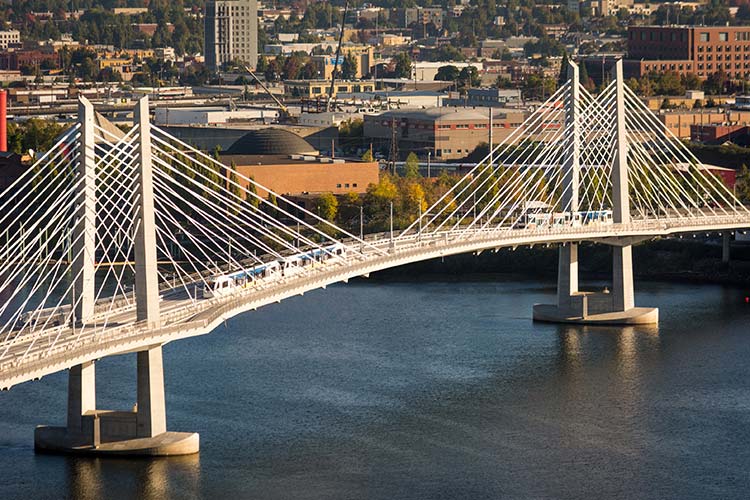